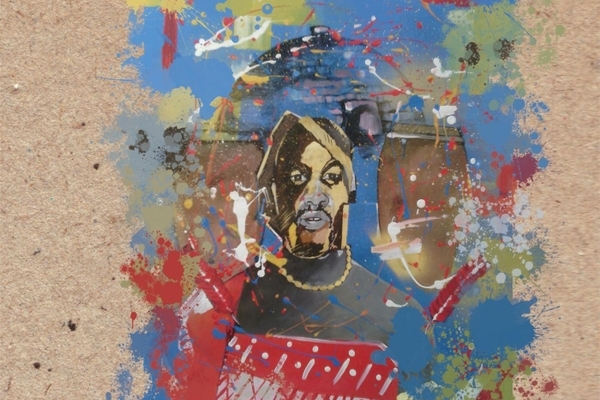 » Tlale Makhene’s new album has hit the sound sphere. I had a chance of listening to it. Verdict? lets just say I was transported…

Outlines the musicianship that will take you through this offering.

Piano leads, Makhene’s percussion is pervasive as the melodious chorus of Max Hoba builds. Nathi Shongwe’s Keys raises the curtains.  Wait for the guitar of Erik Paliani to chip in and the Tenor Saxophone of Ayo Solanke to exchange with it and what you’ve got is a promise of things to come in Swazigold.

This track settles us within the album. Sabu Satsha is audible at the opening supporting the lyrics. But as the song takes it second turn Nathi Shongwe reintroduce the medoc vocals led by Max Hoba. Makhene is there entranced and on fire as one of the female vocalist goes into a Busi Mhlongo mode.

This is a horn base track thanks to the antics of Ayo Solanke on Tenor and Soprano Saxophone. With Max Hoba leading the meditative vocals. Makhene percussion and Satsha’s drums interjects periodically.

Shongwe and the vocalists pays homage to the King with Makhene creating a background canvas upon which all is invited to play.  Ayo Solanke’s horn chips in further down this track. Not aggressively so as not to upset this balanced orchestra.

This is a groove, samba-like. You can almost imagine here that Tlale Makhene was having a joll here as his rhythmic percussion suspends the vocalists. This piece is a fine moment in a personnel that otherwise can be misread as being traditional in a sense of South African jazz vocabulary. Wait until Shongwe (Piano), Lalouelette (Bass) and Paliani (Guitar) have their say.

We return to the unmistakably South African rhythm with Makhene Leading the vocals in a gospel tune. Here the tapestry upon which this tune is built is held together by Shongwe’s piano and Satsha’s drums. Wait for Shongwe to bolt out in the second part of this tune leading us towards its closure where we rendezvous with the subtle but unmissable Makhene’s meditative drums.

Erik Palliani opens this piece bellowing with Makhene. This is a gloomy piece and Palliani as Makhene laments plays his electric guitar closer to a sound of a violin.

This piece is reminiscent of what we encountered in Almost Got Lost, track no. 6. Pay particular attention to Shongwe playing as the Vocalists interchanges. This is an exquisite piece that re-emphasizes that we are in the midground of a promise that has been kept at the opening stages of this musical outing, Swazigold. Both the instrumentalist and the vocalist come together neatly  here and attest to the hinted sophistication that, if you have been listening attentively, reverberates through this album as a work of art.

We arrive at a track that is a cornerstone of this album – Song for Khetiwe and what we encounter is a challenging mashup of Rock, South African Jazz, Soul and Rnb in a uniquely balanced assembly to produce a song that ushers a new sound. Perhaps here Makhene is hinting on just how elastic possibilities are to South African music possibilities and how capable he is as a composer to push the envelope whichever way he pleases. This song is unorthodox and will require more than one listening.  Following an array of sounds inherent in this album it looms alone disturbingly. In retrospect this is a type of a song that should be listened to in isolation at a certain point of your relationship with this album. Paliani’s guitar and Solanke’s Soprano sax interchanges in a conversation that sustains a homage paid to our Khethiwe until Solanke abruptly closes the curtain.

This is an unmistakably a jazz outing almost recalling Labantfu Track No. 2 in its avangardist signature. Here Erick Paliani’s guitar is acoustically sweet as Shongwe’s piano fronts the vocal arrangements composed of Makhene and the assembled vocalists. Sabu Satsha on Drums is there side by side with Makhene as Solanke’s tenor interjects.

Here I could not help it but think about Themba Mkhize, the pianist, perhaps this has something to do with vocal and piano arrangements. In any case here Nathi Shongwe shines in all his glory as a pianist. But you can hear that he is not alone in the wilderness fighting the cobwebs Makhene’s drumming is there and through a widening crack all and sundry gather around.

Here is a groove that closes off a musical spectacle that promises what I think will find homes in those who enjoy music that defies easy categorisation. This piece continues the musical structure experienced in Almost Got Lost Track No. 6 and Emabhunswini Track No. 9 it is a fun piece.

» Swazigold, reflected in title track A Song For Khethiwe, sees Makhene extending the vision we witnessed in The Ascension Of The Enlightened. It is a challenging experience to those with specific musical expectations. But what is remarkable about this is the space that each musician receives in the invitation that Makhene has extended to the musicians featured here.