‘Let us take the word Dada,…It is just made for our purpose.The child’s first sound expresses the primitiveness, the beginning at zero, the new in our art’ – the Dadaist christening Non Art (Richardson, T and Stagnos, N 1974: 109)

Portraiture is one of the most important genres in western art history in that through it great figures in history were captured.The aim of this essay is to view four Dada portraits in terms of how they show 1. Sociopolitical realities 2. Gender Expectations’ codes of convention and 3. The role of spectator. The artworks that this essay will discuss have been produced between 1915 – 1920. 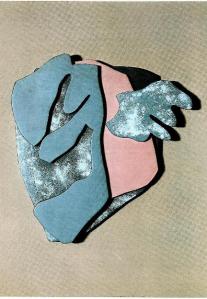 When we look at this work we are confronted by an arrangement of organic shapes, one on top of the other building the composition of the work. There is no reference to the human face. However we are drawn to the medium itself and how it has been manipulated to depict Tristan Tzara (1886 – 1963).

According to Tristan Tzara ‘In art, Dada reduces everything to an initial simplicity, growing always more relative. It mingles its caprices with the chaotic wind of creation and barbaric dances of savage tribes (Chipp 1968: 386). This is indeed true of figure 1. The composition is simple and it looks like anyone who is not an artist might have produced the artwork.

In 1942, in a lecture entitled ‘Abstract Art, Concrete Art’ Jean Arp highlighted that:

1Concrete art (Abstract art) wishes to transform the world. It wishes to render existence more tolerable. It wishes to save men from the most dangerous of furious madness: vanity, it wants to simplify man’s LIFE. It urges man to identify with nature (see Jean Arp, ‘Abstract Art, Concrete Art’ca. 1942 Cited in Chipp (1968:391)

The key word here is ‘nature’. In the Portrait of Tristan Tzara the shapes which represent Tristan Tzara recall forms which can be liken to algae, rock formation or even plant leaves. Observe the gaping shape towards the right.

If we bring one of the questions raised at the outset of this essay, the one that concern socio political references I think that the work is devoid of such references, it is rather a personal account. It is a personal account in that, though its title alludes to an important figure in the Dada movement’ it is an abstract rendition of its subject matter or, to use Arp’s term, it is Concrete. One cannot easily make out the image that the work is depicting, it is the title of the artwork that affords the viewer the opportunity to fathom that it is a portrait and also the viewer’s schooling in modern art movements can afford the ability to make the connection as to who Tzara is.

The portrait then, as unrealistic as it is, terms of abstract art, which strives to save, free man and simplify his life, it represents Tristan Tzara. This artwork which was conceived during World War I is devoid of gender expectations.

The role of the spectator is to ponder what the work is trying to show. The spectator is propelled towards a deeper questioning of what art should be and the form it should take especially bearing in mind the western tradition of art making.

Chipp points out that Dada was an attempt to free the artist from traditional views of the arts to form a conception  of art as a moral and social phenomenon (1968: 380).

According to Lynton, Francis Picabia (1879 – 1952) and Marchel Duchamp (1887 – 1968) arrived in America in 1915 as a visitor from Paris about two years after 1913. The year when the exhibition 2The Amoroy Show challenged the American art world and infuriated press and public (1980: 125), but now what does Tableu Dada tires to communicate.

A monkey rack-doll is positioned in the center of the picture plane. We must bear in mind that this work is an illustration, however in this essay we are looking at it from a perspective of it being an artwork. Lynton points out that Dada was not an art movement. It exposed itself primarily through words, often through several journals that issued from Zurich, Berlin, New York, Cologne, Moscow and other places (1980: 126)

In the work Tableau Dada the monkey-doll is bordered by the words ‘portrait of Paul Cézanne, portrait of Renoir, Portrait of Rembrandt as well as the words ‘natures mortés’, it could be that Picabia is making a mockery of western art history’s greatest contributors.

We know that Pierre Auguste Renoir (1841 – 1919) pioneered impressionism, Paul Cézanne (1839 – 1906) was a leading figure in post-impressionism and that Rembrandt Van Rijn (1606 – 1669) was a prominent 17th Century Dutch artist. Thus viewed against this knowledge the artwork Tableau Dada acquires a heighten connotation as it ridicules the importance of these artists through mockery.

Let us bear in mind that [sic] the Dadaist suggested that reality was too elusive and incoherent to be formally represented (see Bradbury and Mcfarlane ed. 1991: 292)

Dadaism was consequently a nihilistic movement, particularly distrustful of order and reason, a challenge to polite society, a protest against all prevailing styles in art, it was, in fact, anti art (Fleming, 1974:374).

With this work, Tableu Dada, the role of spectator is to think critically about what the artwork concerns itself; the work propels the spectator towards this criticism, a criticism which centers on the significance of Cézanne, Renoir and Rembrandt.

Bradbury and Mcfarlane maintains that it was the impact of the First World War which persuaded poets (and artists) of the younger generation to the fact that [my italics] that western culture was mortal and had been touched in its foundations; that the victor countries had suffered a debacle in ideas and ethics as dramatic as that of the regimes, aristocracies and frontiers among the defeated (Bradbury and Mcfarlane 1991: 293).

Unlike the first two artworks discussed above this work is a self portrait. After a triumphant series of lectures in the provinces and in Czechoslovakia, followed by a climatic international Dada Fair in the Capital in June 1920 Berlin Dada went into decline and by 1922 it was no more. The decline of Dada was also witnessed in as well Cologne in 1922. It was here where [sic] in 1919 and 1920 Max Ernst, Johannes Baargeld and Hans Arp were instrumental in pioneering the spirit of Dada (see Bradbury and Mcfarlane 1991: 297).

This artwork is a photomontage, the word which originated from Groz-Rearfield who worded in a UFA film company (Lynton 1980:138). In this portrait Ernst gaze towards his left (that is the right hand side of the picture). He is wearing a tuxedo. Another figure is positioned at the bottom side of the picture plane, glad in a bridal dress. Consideration of the right scale of the two figures represented in this work has not been acknowledged in that the female figure is quite small in relation to the groom, represented by the image of Ernst himself. Considering the scales of the portrayal of Ernst figure against that of the bride represents a prevalent theme in western art history; that is the dominance of man over woman.

The Bride Stripped Bare of Her Bachelors

According to Norbert Lynton The Bride Stripped Bare of by Her Bachelors, even (Large Glass) is painting in the tradition of Botticeli’s Birth of Venus and Titians Assumption of he Virgin. Lynton highlights that a note among Duchamp’s published document says

The bachelors serving as architectural base for the

bride, the latter becomes a sort of apotheosis of

For Marcel Duchamp Dada was an extreme protest against the physical side f painting. It was a metaphysical attitude…it was a way to get out of a state of mind to avoid being influenced by one’s own immediate environment, or the past. To get away from clichés – to get free (Chipp 1968: 392).

What does one make of the work? the work does not refer to a person, I have deliberately included the work in this essay due to what the work’s title refers to – the bride and her bachelors. Although Lynton points out that the theme is sex, I will like to propose a counter and state that the work is a metaphor for Europe, especially in the inter war years. Europe in this work is personified as the bride and the bachelors are her warring countries.

The bachelors at a heightened level are the aristocratic, bourgeoisie and imperialists who manipulated the progress of Europe through war. Therefore The Bride Stripped Bare by Her Bachelors is a metaphor for the First World War.

The Dadaist agreed that:

1) The war had been primarily Germany’s making.

2) Dissociation from the so called civilized cultural Grandeur of Society by means of acts and objects create in opposition to western civilization.

3) All art, even the Avant Garde of yesterday and especially Expressionism was condemned as part of the war machine (Lynton 1980: 24)

The last work discussed in this essay attests to this point. Dada stood against western civilization on all spheres especially the Visual Arts. To address its dissatisfaction with western civilization it took the Visual Art as its point of departure. With reference to Duchamp’s Bride stripped Bare by Her Bachelors, the artwork discussed in this essay succeed to show how Dada tackled sociopolitical realities.

Gender expectation codes of convention is illustrated by figure 3 and figure 4 in how the female body has been used. In terms of figure 3, the ideal, it can be deduced from the Dadaist agreement, is to destroy one of the genres of western, portraiture, to make it undesirable. With Figure 4 the female or feminine characterization is given to mechanics which are designed to be used. Thus this demonstrates that Dada an ideology it gives  women a subordinate role. Moreover Dada stances in its questioning of what  constitutes the art object it arouses questions of validity concerning western art to the spectator.

1. A term originally synonymous with the broadest sense of the word Constructivism. Used particularly from about 1930 onwards to describe the geometrical aspect of abstract art, it was exemplified by De Stil and continued in the abstraction Création group, the artwork being a distillation of the balance of the forces in nature. In 1948, the Movememnto Arte Concretá was founded in Italy: Its members included Magnelli, Capogrossi, Osvaldo Licini (1894 – 1958) and Atanasio Soldati (1896 – 1953): the group around Fontana pursued a parallel course (See Charmet, R and Brunyate, R (ed.) 1972: 55).

2. The Armory Show was an exhibition in New York (17 February, 1913) intended to introduce Modern Art to America. Sponsored by the newly-formed ‘Association of American Painters and Sculptors, it was organised by Walt Kuhnand Arthur Davies and called ‘International Exhibition of Modern Art’. That first showing at 69th Regiment Armory on Lexington Avenue, decisively influenced American Art. Although American works pre-dominated 9Most of them highly conservative) the European selection has the more lasting impact. There was a survey f French art from Ingres and Delacroix to the Impressionism; a very large section was taken up by the Symbolists (particularly Rëdon) and Pos-Impressionists; there was also a large collection of work by Henry Rousseau. Most of the contemporary art movement such as Fauvism, Cubism and Orphism represented, but not Futurism. The Fiercest discussion centered on the work of Picabia and on Duchamp’s Nude Descending a Staircase. (See Charmet, R and Brunyate, R (ed.) 1972: 55).