It is a privilege for one who has not dedicated one’s self to the pursuit of art practice, one who gathers joy in its consumption through the activity of looking to be afforded the opportunity to be familiar with those who are engaged in the production of the visual art object.

Visual Art Production like any other art form attains its full expression as a unique form of individualistic artistic expression now and then when a new talent emerges. It is a duty of those involved in its pursuit of visual art practice to unveil a new artistic language unique to their production in order that they are discernible from the multitudes of other artists. An artist achievement is unquestionable when, through hard work and prolonged search for individuality, arrive at a new artistic language to communicate ideas.

The triumph of an artist is in two respects. First, the artist must contend with their context in their pursuit of their chosen vocation this context differs from artist to artist. Secondly the artists must go through the rigors of mastering their chosen media.

With these two aspects conquered only then will the artist settle on a journey of self discovery and invention. These two aspects are here stated in their successive nature: first self discovery and second, invention. In their further elaboration: self discovery is attainable at that juncture when an artists fully embraces their vocation as creative participants in the visual arts and invention will stem from that point in their career when they stumble, more often through trial and error and seldom through luck, at what will be their formal language in art – their unique style. But before we swing wide we must retain and address context and media. Introduced at the first few lines of the present paragraph, context within which artists practice differs from artist to artist. More often it is financial circumstances that must be transcended in order to establish practice. With regard to the mastering of the chosen vehicle to deliver the message, or simply put medium, the artist must learn to acknowledge the artistic approaches laid down before him by his predecessors through Art History; blessed are those who learn directly from the master. Having gathered what is essential from the fountain of art practice, the master that is, the artist through time emerges and charts a unique route of their own. In the long run, through commitment and perseverance the artist will acquire his or her rightful place in the History of Art.

II Against the Grain 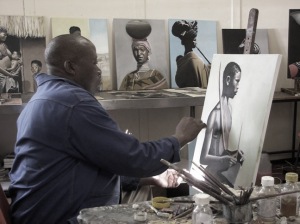 Langa, an Atteridgeville based artist who is both conversant in the art of pastel painting as he is in traditional oil painting. Matlou’s choice of medium departs sharply from that of his master in that upon assessing the two artist – presently, one can’t help but notice the return to the basis of visual art – drawing and the acknowledgment of the drawing paper itself. Whereas the older artist, Langa, is settled in pastel and oil painting Matlou takes as a point of departure pencil drawing itself and reverts to the surface area through paper embossment and burning.

Arriving in Gauteng – Tshwane in the new century Matlou hailed from Polokwane in Ga-Sekgopo district. His plans initially were to study Finance and accounting at Tshwane University of Technology (then Pretoria Technical College). With minimum training in the visual art received from sessions attended at a community based art project Matlou left the institution in middle of his second year level to pursue a full time career as an artist. The year 2002 finds him doing consignments with galleries such as The Light House (located at SANLAM centre) as well as Indusat Art Gallery (at the Tramshed Centre). A year later Matlou had a breakthrough when IDASA (Institute for Democracy in Africa) brought artworks from him to confer as a present to the then finance minister Trevor Manuel post 2003 financial speech. This body of work comprising of pastel drawings and a few Oil paintings, reminiscent of the style of Solly Malope, spawned a further interest in his work that saw a mounting of Matlou’s paintings in an exhibition space offered by Amnesty International, Johannesburg. His work was then presented and sold through Queens Lifestyle Ornate Shop. Here he had to produce work that would be sold to complement the exclusive furnisher sold at this shop.

He ventured Pretoria east where he struck a relationship with the Chris Tugwell Art Gallery. The gallery ordered pastel drawings of the same approach sold to Amnesty International and bought them directly on delivery. Matlou admits that he met a different business conduct compared to Lighthouse, Queens and later Articles and Frames (which represented him as of 2005) to present, in that the gallery paid a small amount for the hard work that went into the production of the drawings.  A harsh lesson was learned about how the value of a work of art can be compromised if an artist is pressed to make a sale in order to get by financially.

The time that he became aware of the work of William Langa overlaps with consignment relationship at Lighthouse Gallery, and the hard learning of the Tugwell Gallery situation. Through being acquainted with Langa’s work Matlou returned to the basis of the plastic arts – drawing.

His formal immersion in painting stemmed through an artist circle he belonged to through a chance meeting with Ofentse Monkwe at an art competition held at Sammy Marks Square by the Mall. Monkwe introduced Matlou in turn to Given Ranko whom together with the Matlou will exploit the Magnolia Del Park Art Flea Market on certain occasion with pastel drawings.

While still doing consignments at the Lighthouse Gallery he one day had a chance encounter with another self taught artist painter Obed Baloi who was also exhibiting there but felt that he had a thing or two to learn from Matlou as far as painting is concerned after seeing one his work on display – Baloi was fascinated by Matlou’s technical approach to building forms and volumes through colour perspective. A friendship sparked from that encounter and soon through the connecting force of art Ranko, Monkwe, Matlou and Baloi worked together in Baloi’s flat cum art studio located in the center of Town. There occurred a cross pollination of ideas between these artists. Unlike Matlou and Baloi, Ranko and Monkwe1 were students at the Arts Faculty Department of Tshwane University of Technology. One can only guess the nature of chemistry that occurred within this quartet during this period as art theory inevitably pitted against spontaneous art practice.

Unfortunately due to the temporary nature of the flat rental life the studio was disbanded when Baloi moved from Pretoria due to job prospects elsewhere. Hosea moved west of the capital city, to Atteridgeville, and sought solace in a relationship with his guru William Langa the artist who in time will point the road back to drawing.

No reflection on an artist’s life is complete without taking a closer look at least one work from their oeuvre. Otherwise our exposition remains incomplete and directionless on the level of production and practice. The reader is hereby introduced to Matlou’s After The Meeting (2010), see illustration 3. For the mere purpose of looking we shall allow the work to make itself comprehensible to us through our innate activity of looking. Then I shall elucidate on the central preoccupation of the work.

We are introduced into a caricatured scene of men in suits mostly bald head akin to monks. Only one of the men, there are no women, holds a briefcase. In this ball pen drawing the viewer immediately notices the overcrowding of the group of men in a darkened corridor that stretches further onto what may be where the men had congregated prior to the end of the meeting.

The motive of using men in suite, Matlou explains, stems from his fascination with the serious world of the business man and the attorney. For him he sees the wearing of the suit as an accentuating element of the business man or lawyer into the realm of seriousness, the realm where often life changing decisions on behalf others are made. This piece is rather different in its manual practical production process in that it represents another stream of work process through which Matlou’s drawings are produced. It is pure drawing on fabriano paper. The other approach is through the Pen and Flame technique wherein the drawn surface itself is acknowledged through embossing and flame discoloration, a closer example is the work visible in illustration 1 above. A short elaboration of the process of this technique will surface here:

The desired drawing is done with a pencil on either watercolor or fabriano drawing paper. It must be noted that the choice of the surface is of utmost importance in terms of the blows that the paper has to receive as it is molded towards the finished artwork.

A drawing is first made on paper as a preliminary motif, then transferred onto a zink plate and given blows with the point of a flat screw driver until a fine impression is visible, of course visibility can only be acknowledged when one tilts the plate at a particular angle towards light. With the impression achieved on the plate the sides enveloping the impression are then smoothed.  Then the plate is finally burned and burnished while at high temperature and cleaned.

It is at this stage that the embossed relief is ready for the paper. A clean sheet of drawing paper paper is introduced and a BIG ball pen back side is used to embossed the characteristic male suited figure which is Matlou’s vehicle of communication from the zink plate to the paper surface. Once the paper has picked up the embossments, heat and fumes from a cigarette lighter are introduced to char the image and give it its ghostly brown feeling.

Matlou, whether working on pure pen drawing or his unique flame-embossing technique has found an artistic language solely his, the next pinnacle will be a further transformation of his recurring motif, the suited business man, towards an uncharted territory in order to evade stagnation. After all Art is art when it surprises and reeducates even those who claimed to be knowledgeable about it. Furthermore Art is progressive when it pushes the frontiers of that very knowledge into new avenues not necessarily retaining identifiable motifs for it to be acknowledging as creativity at its best.

1. Given Ranko’s Tonkana blanketed Bed and Fridge was shown in SASOL New Signatures Art Competition in 2006. Ofentse monkwe’s semi abstract landscapes accompanied the body of work exhibited in the For Sale Art Exhibition during the same year. The two were students at the Faculty of Fine and Applied Arts at Tshwane University of Technology

This article was written during the time when Hosea Matlou had a solo exhibition at the Centurion Art Gallery in Lyttleton, from 15 June to 2 July 2010. This Exhibition was curated by Nthabiseng Montshiwa who is a curator at Nirox Foundation and also does free lance work in art curatorship.

One thought on “Hosea Matlou: Towards Simplicity”