*a selfie is self-portrait photograph, typically taken with a hand-held camera or camera phone

SELFIES abound the social network. I think there is something immediate about them. I will come back to this line now-now.It is not as if the *selfie is a yesterday phenomenon. Think about the self portraits that adorns our galleries from the ages of yore yonder. In those days the artist, having contemplated himself, set out to capture his likeness as honesty as possible to capture his essence so that those who will give the priceless work attention and say ‘oh that is a Gerard Sekoto’ oh this is a Maggie Laubser will be titillated by the aura and mystery guess game of what the sitter, artist was preoccupied with when the work was spun.

Put another way the artist might have just been going through a dry spell wherein he did not know what else to do with his artistic prowess. Like experiencing a lack in subject matter; and there, while he shaved or passed before the mirror, or adorning herself with makeup a face looked back. Recognizing a passing acquaintance of their deep seated sorrow, of art like thing proportions, a step faltered, an idea struck. Though a quench that never gets away from the artist, no matter how much they try to quench it growled somewhere in the background and sunk away in the dark corners of the creases of ‘you must paint some more’ frame of mind. The artist embarked on the new work with gusto pretty much surprising to even themselves. It was planned, but inspiration also had a role to play in this tale. finally after unceasing labour the work appeared, but not as immediate as a snap away selfie with a two thousand zar plus smart phone. For a selfie done in this fashion is an automatic declaration that ‘right know I feel like this, and I am here, I am with x we are doing y and so forth and so forth. A selfie in a true sense of the now is a quickie display of our immediate selves to ‘our world’. 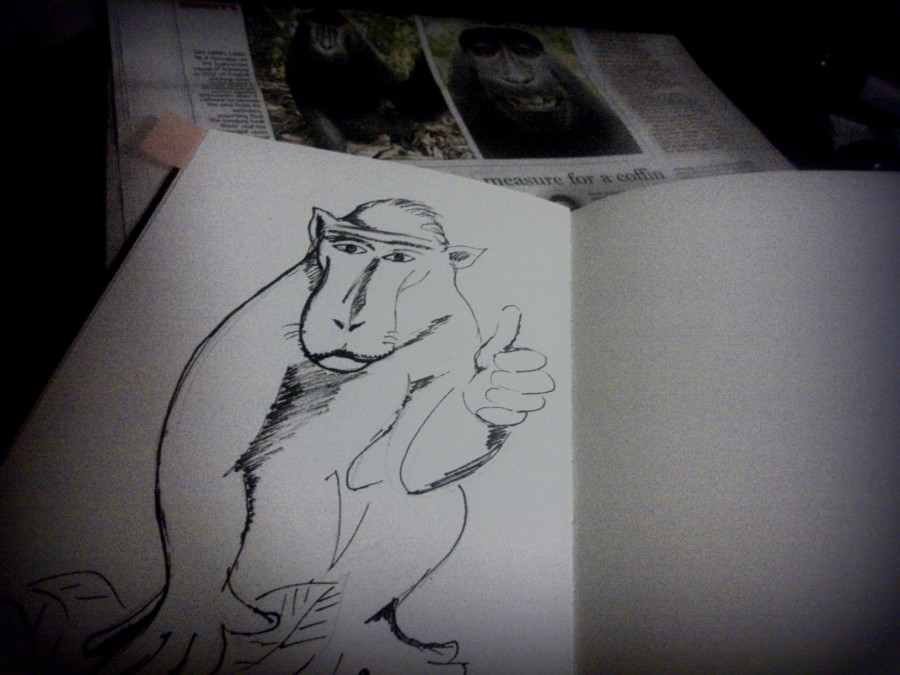 Somewhere and sometime ago in an Indonesian National Park David Slater, a wildlife photographer, and his tripod mounted 5D Canon camera had a three day snapped away spree photographing Crested Black Macaque Monkeys. The mischievous lot, it is reported, jumped about around man and his machine until one got hold of the camera trigger and the clicking sound of it pricked his ears with interest while the others scuttled away. It was quite an interesting sound – the ‘click’, so much that the ape kept clicking away until the party came back fascinated by the click. Smiling with his display of bravery at the click the Macaque was oblivious at his artistic outing. He was busy taking selfies. The story goes on that dear Slater thought the whole act was funny and he had a joll witnessing it. When he got home and browsed the memory card he found photos of Macaque selfies as well as group photos of the Macaque party apparently a lot out of focus and a few in focus (one of which would be famous). Mention must be made that even he himself appeared in some of the photographs. Slater reportedly said that he had hoped for this outcome when he set out to be amongst the Macaque Monkeys.

Now a photograph, one of the selfies of the Macaque, found itself on the site of Wikimedia and the photographer has been told he does not own the copyright of the photograph. The site argues that since the photograph was taken by the Crested Black Macaque, Slater, cannot claim copyright. The work, the site holds, belongs to the Macaque, the very one who took the photo. Silly you might think this recent tale is. However it questions the whole thing of mechanical aides in creativity. Especially when things are left to chance. Consider that if slate never spent those three days in that Indonesian National Park the Macaque Monkeys will never have had the opportunity to fiddle with his equipment. Whether the brave one amongst them knew what he was doing or not when he clicked away is another story with a divergent plot even if we spoke Macaque. But it leaves a pudding of ponderings along the lines of cause and effect doesn’t it? Besides, and sadly so, the Crested Black Macaque Monkey does not own a smart phone or a pc wherein he can relish the fruits of his labour as well as learn about the ensuing fuss of something that happened in 2011.

The Macaque is the ‘other’, he cannot speak for himself he is spoken for. Worse thing, he might not even care. For all that we may take a light guess: he had fun and that was that. He has moved on. On the other hand the equipment belonged to David Slater without whose equipment the jolly loving Crested Black Macaque Monkey would not have been captured. Fairness has it that credit must be given where it is due – Macaque or Slater? My verdict: I think both made the image possible. Neither exists without the other. Slater, seeing that he cares so much about wildlife that he has made it his subject matter could come to a truce and say that the proceed from the sales or use of the famous copies of Crested Black Macaque Ape Selfies could be used towards alleviating the living standards of the Macaque. Now that’s a noble deed to be done for a primate facing extinction.